Driverless Future?  Not so Fast! 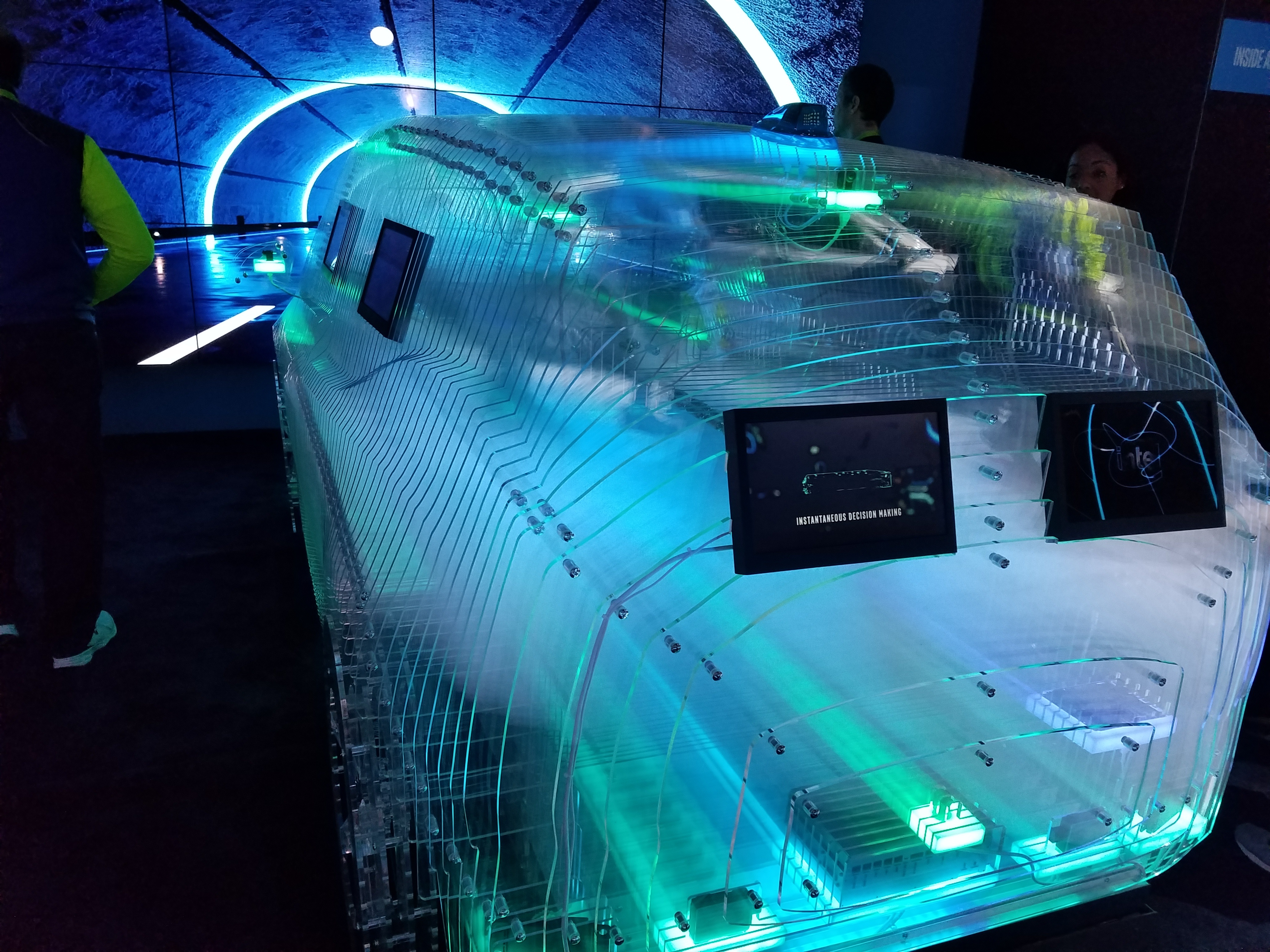 Amongst all of the small businesses, innovators, and Makers, I was on assignment to find Industrial IoT trends at the CES 2018 earlier this year.  Large corporations were not on my “must see” list, as my company, NexPCB.com, is focused on investing in the future’s next big thing.  So I skipped past the massive crowds at Samsung and Sony, trying to remain focused at this colossal tradeshow event, which is obviously geared to consumers.

Then something interesting happened!  A power outage?  At the CES?  As approximately 70,000 of the 125,000 attendees hurded to the exitways, I thought this power outage was my perfect opportunity to do something unexpected:  Sit down and relax for a few moments!

But right in front of me, and extraordinary opportunity opened up to me that was previously completely inaccessible:  Intel’s booth.  The Intel booth could have been a tradeshow in of itself.  None of Intel’s workers were leaving their booth, power outage or not.  I found myself as the only guest at the Intel booth, and I was treated to a behind the scenes access that I could have never dreamt of.

This is Las Vegas, and I think it is a pretty safe bet to conclude if Intel is investing Billions of dollars in R&D on a particular area, then this area might deserve my attention.  And while I had to see Intel’s demo on one of their prototype Quantum CPUs, the folks at Intel treated me to a tour of their Industrial Internet of Things, and Intel’s vision of the future.

Intel had on display what looked like a Glass car, in front of floor-to-top-of-booth LCDs, to demonstrate how IoT will change the way we commute.  And this future was not a dream or wish-list:  the 20+ minute demo I was given of Intel’s vehicle IoT was already rapidly being adopted across all major brands, from Ford to Volvo.

At first, I assumed this was a demo of the “driverless car” fad that has swept the minds of an entire generation.  I have seen these driverless cars, and while they will change the driving experience in the distant future, Intel’s IoT technology is set for world-wide release by 2023.

The “car” was not a driverless demo.  It was a demo of how IoT will empower and modernize current technology to be smarter.  The glass car had 16 “sensors” built into the body.  While a human drives the car, these sensors are also busy at work…

Each sensor was recording the current driving route.  Using lane markers and GPS and the aggregate collection of millions of cars on the highway, these sensors, in what seemed like real-time, were able to predict traffic situations, recommend alternate routes, and new safety features that I never had imagined.  Traffic and alternate routes have been in our vehicles for the past decade, but not like this. 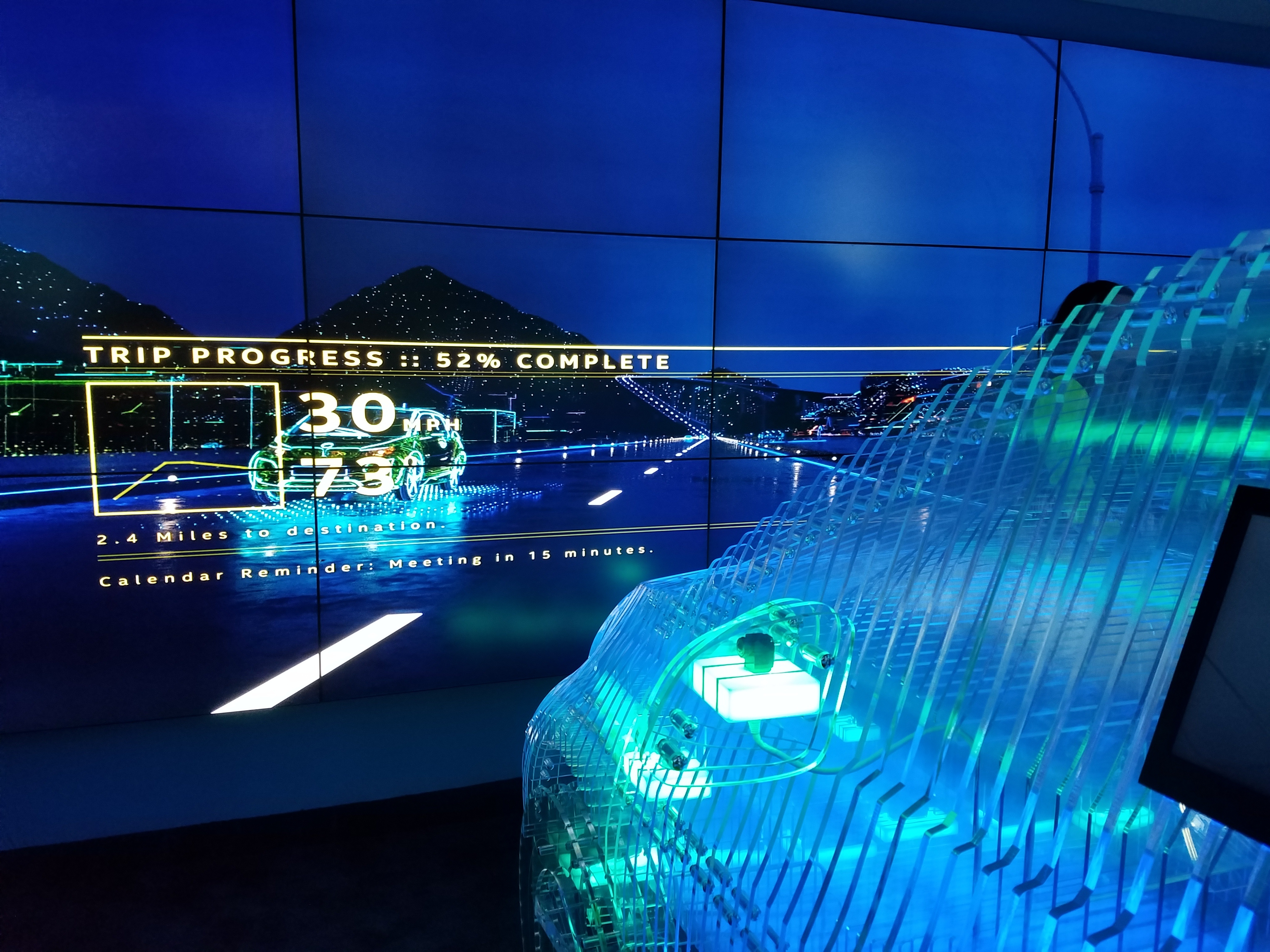 While each car on the road was outfitted with over a dozen sensors, from Intel’s perspective, each car itself became a sensor.  Each car was busy uploading its sensor data to the Intel cloud.  Just about every metric imaginable, from simply the speed of the car to the temperature and humidity, was being aggregated in one colossal transportation network.  The results of the cloud data collection was display on the windshield itself, in a way that was not obtrusive, but rather a significant step in vehicle safety, the likes of which I doubt has been seen since the invention of the seatbelt.

The windshield was an augmented reality glass display.  Remember how every car is a sensor?  Well, Intel’s vision is made so clear:  a warning about a cyclist about to come into my field of vision.  An ambulance that had charted its navigation to a hospital, and has alerted my car to its approach, 2 miles prior to intersecting with me.  A would-be accident in the form of a car running a red light, where Intel’s IoT truly do not have enough time to communicate this inevitable collision, so the breaks began to pump on my car… And not just my car, but all surrounding cars.  The sudden application of my vehicles breaks did not result in a pile-up collision behind me, as all cars reacted to the red-light runner (Obviously a car not outfitted with the latest technology!)

I have seen the power of mass data collection in many forms of technology.  These sensors showed me where a parking spot had just opened.  That is a very useful metric, but it does not compare to when the big data collection to human safety- the ability to save lives- this technology has a future not beyond the reach of the next car I purchase over the next 5 years.

As each car was now a sensor, this data provided near real-time reaction and responses to vehicle stimuli that would impossible for even the best defensive driver to be aware of.  But Intel’s demo was not complete:  How does the crunch of big data like this serve another purpose?  Over time, the highways and roads will be mapped in such a way as to show all known locations likely to have an accident, at what time of day, on what day of the year, under what weather conditions, and given there’s a Black Friday sale at Best Buy!

Perhaps Intel’s vehicle IoT sensors will be treated as a gimmick?  Not in the USA.  Intel informed me that their technology is set for review to become standard on all vehicles over the next five years.  Five years may sound incredibly optimistic, but when you combine the technology with the clear evidence that it can and will save lives, this tech is being fast-tracked to the front of the line.

While Google and Apple demonstrate their “driverless cars”, fixed to particular compatible routes, I look forward to my Intel-powered car, with its augmented reality windshield and IoT sensor collection on the most massive level, to rewrite the driving experience.  Suddenly, in fact, I hesitate to give up the keys to my car to a computer, because IoT just made driving so much safer and easier.