Time after time, makers have proven what they are capable of when it comes to reinventing old ideas. In this post, we will be looking at how some folks took their Christmas decorations to the next level by adding Internet of Things into their arsenal. The free spreadsheet below has all the resources you need to built these yourself!

This project looks like its straight out of a rock festival stage! Christian Kratky form Germany realized that a preconfigured light sequence for his home lighting wasn't going to cut it. So he decided to orchestrate it with his MIDI Drum Kit. The results speak for themselves:

While some of us are going crazy over IoT security, Kevin Cruzner not only decided to give internet capabilities to his Christmas tree, he also made it publicly accessible!

Visitors on his website could interface with the Christmas tree via a light control panel and also see changes in real-time. We know it works since he live-streamed the project. If this doesn't sound complicated enough, check out the next Twitter controlled Holiday Lights project. With this project, this Christmas tree probably received more tweets than it did in his past life in the wilderness.

The project runs on a Raspberry Pi with the Twitter-Pi application installed. This application listens to pre-configured Twitter mentions and hashtags, and operates the GPIO pins in return. You can configure different hashtags for different light colors and locations. Other than offering an exciting way to run your Xmas lights on, this is also a great way to make your hashtags or accounts more popular! 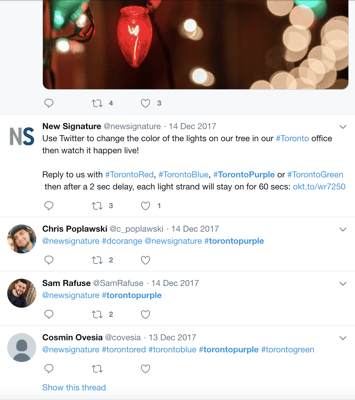 Since its inception, the internet has evolved at an unimaginable velocity. Thus, some of the technologies that it still runs on today was made for a much smaller number of users in mind. The popular IPv4 (The addresses that go 123.456.789.000) is one of these technologies. It has a limit of a little over 4 billion addresses that can go on the internet. This might have seemed like a lot 20 years ago, but with the advent of IoT and mobile devices, IPv4 turned into a bottleneck. IPv6 came out as a solution with 340 undecillion (that's a billion billion billion, billion) unique addresses. It almost sounded like a solution was finally conceived, until this project came into existence.

Jinglepings is a 160 by 120 pixel LED Display that uses IPv6 pings to make itself accessible by the internet. Each pixel has an x and y coordinate, and RGB values for setting up its color. Ted Yapo of the Hackaday Blog realized that is 19,200x2 to the power of 24 unique addresses that went into the project, a whopping 75 times more addresses than what IPv4 has in total!

That's a lot of IP addresses right there.

Snow globes have been around for at least 200 years, and thanks to projects like these they stay around for a while more.The production of the first snow globe was a business secret. That's not the case with this Arduino Snow Globe, since the project is completely open-source.

This digital snow globe uses a tilt sensor switch to recognize motion and starts a snowing animation in return. The project uses a compact 0.96 inch OLED display (which is great for monitoring applications.) and runs on an Arduino Pro mini. You can wear it around your neck too!

Could hook one of these up on your Christmas tree too!

For those who would rather enjoy looking at a beautiful winter landscape in the virtual world, a VR snow globe project could be a better choice.

Appropriately named Let It Snow IoT does a couple of things. First of all, it hosts a website on the Arduino using an MKR1000. It then reads rotational data through an accelerometer. The developer, Ron Dagdag built the graphics on the versatile A-frame, a framework for browser-based VR development. Although he used an HTC Vive as the display, we suggest you get an XR Development Kit from DisplayModule for developing your own experiences freely. The developer features a great piece of advice for small-scale maker projects as well: "Think small." No need to overengineer things when you are only trying to have fun!
Who wouldn't want to throw snowballs at their fine creation?

Some of us prefer the smell of pine cones rather than mystery plastic in our house. So you might be thinking of getting an actual tree for placing your gifts under. This project suitable for making sure your leafy friend survives the holidays with an adequate amount of water.

This invention is based on the mcThings platform. mcThings allows bilateral communication between sensor nodes and devices via the internet. It then sends water level information to the users phone via automated tasks through MQTT. Although this is practical, we think using the narrowband IoT method would eliminate the need for a local network. We will cover NB-IoT in an upcoming post.

Although not technically an IoT device, we chose this as a notable mention. Maybe some makers out there will come up with a way to incorporate image-recognition or GPS to automate this awesome project.

For some of our readers in the northern hemisphere, plowing the snow in your yard might require more physical exercise than what you were planning to do in the holidays. A tutorial posted on introrobotics will teach you how to work with mechanical and electrical parts simultaneously.

For this project, you will need to plan everything from the casing, motor and the battery to remote control and video output. That's a lot of things to take into account! But if you execute your plan well enough, you might never have to walk outside in the freezing cold with a shovel ever again!

The holidays are too long for a maker to not come up with something new. Let us know in the comments what your holiday build is going to be! If you like the challenge, you can even take your creations from a prototype to a finished product. We are always here to help turn your innovations into great businesses!