The Basics of Display: In-Plane Switching

At the China International Display Industry Conference in 2018, JDI (Japan Display Inc) presented an “Introduction of JDI’s Latest Technology” speech and showed the picture below:

In this figure, the chart shows the trend of share in LCD (Liquid Crystal Display ) display technologies. JDI had a strong advantage in IPS technology because Hitachi, one of JDI main shareholders, is the company that initially developed IPS technology. Now we often see this word within display glossary or product specification. So, what is ?

IPS stands for In-Plane Switching. The name carries the implication of how the technology works by switching the liquid crystal molecules in only one plane.

Figure 2 (below) can help us to understand it a little better. On the left is the conventional LCD and on the right is the IPS technology LCD. The LC (Liquid Crystal molecule, same as below) in the LCD will change the direction following the electrode voltage. Conventional LCD’s LC switch with free angle including vertical and horizontal. But IPS' LC switch on plane only and the long axis of LC is always parallel to the substrate. 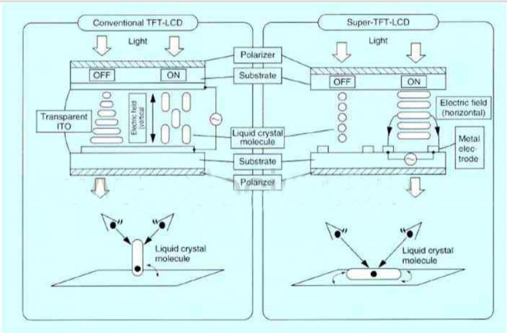 IPS is normally black without power and the light transmission is controlled by the electrode that is vertical with LC long axis. Higher voltage creates a sharper LC switching angle and thus lets more light through.

What is the advantage of IPS?

The most improvement of IPS technology is that it corrects the difference of view angle of conventional LCD screens. In Figure 3 (below), the projection size doesn't change proportionally to the change in angle in traditional LCDs. The brightness is also not the same because of the phase delay and light transmission difference.

The LC of IPS LCD is horizontal, so the projection size is the same and there is not a brightness difference even you watch from a different direction. It is a fundamental solution to view direction differences that enlarges the viewing angle at the same time. 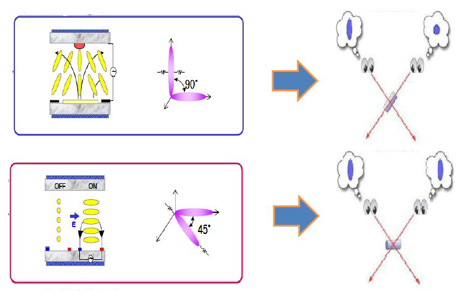 There are many other advantages of IPS. Some of note are the better color expression and contrast ratio is very high on static status because the switch angle can be controlled by voltage accurately.

Because LC is on a certain plane, the rippled area is small and it recovers quickly if the surface is pressed. For this reason, IPS LCDs have the popular name of “Hard Screen."

What is the disadvantage of IPS?

IPS does have some disadvantages. The Aperture Ratio is low and affects the light transmission as the positive and negative electrode both placed on the lower substrate. There is also a need for a brighter backlight and more power required for driving the LC switching.

What is the IPS category and indicator?

There have been many subsequent technology developments on top of the IPS base that have different characteristics, advantages, and disadvantages. tend to have different viewing angles, brightness, contrast ratio and color saturation levels. They also come in at varying costs. Since they tend to be quite different in character, it's important to evaluate them on their own merits and not treat them as the same technology. In a subsequent article, we will discuss some of the different technologies and some of the advantages that each .

If you're looking for displays, please be sure to visit our sister site at displaymodule.com and check out the great selection of every type of display you can imagine!