6 Scenarios Where You Should Use ENIG PCB Surface Finish

In this first chapter of our blog posts discussing the suitability of PCB Surface finishes based on different applications, we will be talking about ENIG PCB surface finish. Surface finishes allow for better solderability of exposed pads on a PCB. The whole industry is moving towards ENIG at a high pace, so it is important for you to know if this is the option you need, given this technique's higher cost. Let's start with the basics: (or jump to the use-cases)

ENIG is short for Electroless Nickel Immersion Gold, also known as immersion gold (Au), chemical Ni/Au, or soft gold. An ENIG finish is formed by the deposition of Ni-P alloy on a catalyzed Pd surface generated through displacement reaction on a copper surface, followed by a thin layer of gold finish. So far, ENIG is realized through either a displacement reaction or through a combination of displacement and reduction reactions in the plating solution. The resulting nickel thickness is usually between 100 to 200 µin while the gold thickness is between 1 to 5 µin. 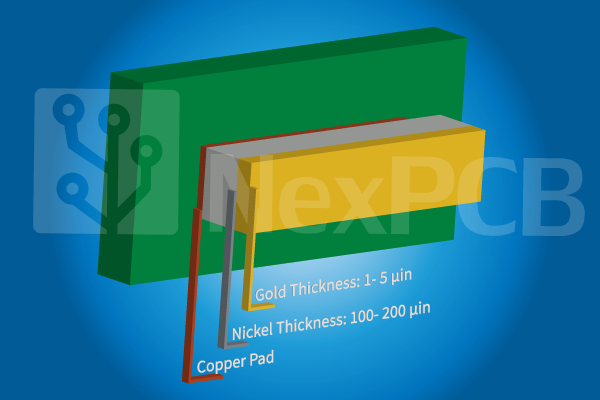 As we know, there are many kinds of surface finishes for PCBs, such as immersion gold, immersion silver, lead-free and lead-containing HASL, OSP, etc. Why do we need these different types of finishes done on PCB? Or to put it in other words, why do we need this kind of surface treatment, and what can it provide? Before we talk about why we need ENIG, let's take a look at the 6 characteristics of an ENIG PCB. Understanding the basic features of ENIG PCB enables us to understand why we need it.

We discussed ENIG and other PCB surface finish alternatives at length in a comparison post. Make sure you check it out

Pros and Cons of ENIG

ENIG process is in line with the environmental protection requirements advocated by many standards worldwide. The lead-free process gives customers ease and assurance in using it. As a chemical process, ENIG ensures a flat surface of gold covering the pads, which allows for better soldering performance and a longer shelf-life. It is especially suitable for modern automated SMT, and also very friendly to BGA soldering. Therefore, PCB with higher precision requirements often opts to use ENIG.

However, the ENIG process also features disadvantages, namely, higher cost and higher process complexity. With consideration of cost, when precision or quality requirement is low, lead-containing or lead-free HASL is often used. In the next episode, we will look at other surface treatment methods for PCB and the differences between them.

6 Scenarios In Which You Should Use ENIG Surface Finish

ENIG surface finish isn't easy to oxidize and can be used if the assembly or storage environment is prone to cause oxidization. Many PCB Fabs in China are in the hot and humid coast of the Pearl River Delta, so unless your boards are immediately going into PCBA, you should get them ENIG'ed.

If the PCB trace width/pad spacing is insufficient, you should consider ENIG since it minimizes shorts between exposed copper surfaces thanks to its anti-creeping properties.

ENIG is very suitable for bonding processes. So if your boards require wire bonding of any sort, it should be the way to go.

Due to its conductivity and high reliability, ENIG can be used in keypad applications that require thousands of presses happening on the PCB surface. Unlike Hard Gold coating, they are solderable, so buttons can be soldered directly on the PCB.

Due to its corrosion resistance, ENIG can allow for larger pads without sacrificing on product reliability. That means you can design pads where heat builds up larger than your standard size. This will allow you to use ENIG coated pads as thermal sinks.

Who doesn't like to see some good old shiny gold on their PCBs? Although most users won't realize what coating went on your pads, if your product consists of bare boards, Arduino HATs, and the like, you should go with ENIG. Not only the surface finish will keep your boards solderable until it gets to your customer, but it also gives them a better look, as long as they are kept in anti-tarnish packaging.

With the increasing precious metal prices, ENIG may come at a slightly higher cost, but it offers many advantages to HASL. If you want to learn more about the applications of different PCB Surface Finishes, be sure to subscribe to our blog to get quality PCB manufacturing tips from our engineers.

Having majored in automation engineering, Chen Lei previously worked on analog devices manufacturing and electronics design. He's now one of our electronics design experts at NexPCB, bringing IoT innovations to life one board at a time. In his free time, Chen likes to disassemble electronics gadgets to see how they were manufactured.

Pros and Cons of an Immersion Silver PCB Surface Finish