At last, GPU Prices are Going Down (Thanks to Miners!)

Rising GPU prices have certainly caused trouble for anyone working with hardware-accelerated rendering applications. But thanks to slowing demand from crypto miners, things are starting to go back to normal, even amidst the ongoing supply chain challenges. 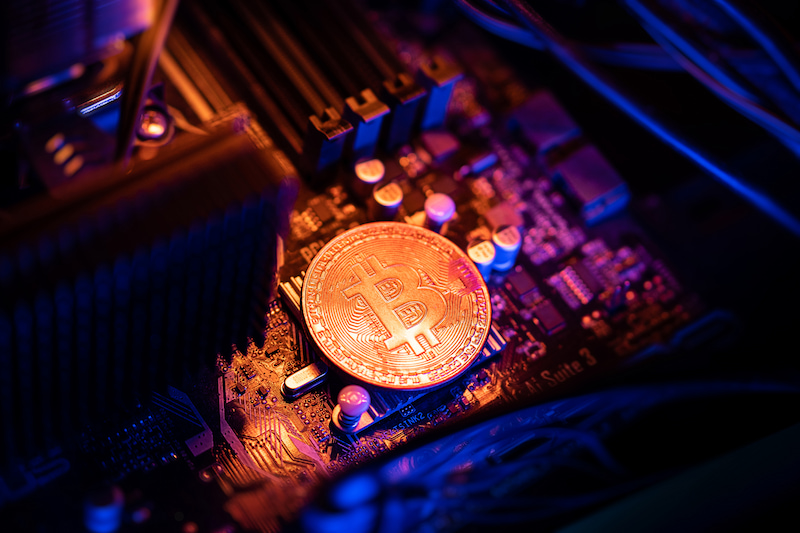 Why Were The Prices Rising in The First Place?

Nvidia released its RTX 30 series graphics cards at the end of 2020. At the beginning of the release, these 30 series graphics cards at an appropriate price were in short supply because they have much higher performance than 20 series, and Samsung manufactured inadequate 8nm due to the COVID-19 pandemic. Therefore, their price increased by RMB 500-1,000 from the start. This situation should have been relieved several months later. However, after 12 months, the price of graphics cards keeps rising, even higher than that at the beginning.

Mining BTC, the largest virtual currency in the world, needs huge computing power. But the award mechanism of ETH and some other small currencies still make it viable to use high-end GPUs to generate a considerable amount of money, as long as crypto prices stay high.

We can see that from November, ETH prices started going on a hike. Based on the price of GPUs (close to suggested retail prices by the manufacturer) at the time, this meant that you would get your investment back in one year of 24/7 mining. With the increase of the price of virtual currencies, the maximum annual rate of return was even as high as 372% in the April of 2021.

So far so (not) good. Even if you’re not a miner, and simply need a good GPU to run Fusion 360 on, this meant that you had to pay bucketloads of money to get your hands on even a second-hand GPU. These GPUs were abused heavily from mining all day and night and had a high chance of failure.

Now let me tell you what’s causing the prices to move back towards the MSRP.

1. Price of virtual currencies are decreasing

As mentioned before, the price trends of graphics cards and virtual currencies were almost the same. In early May this year, the price of major cryptocurrencies reached peak levels. They started declining quickly afterward. This meant that the gains from mining with graphics cards were decreasing. Miners began to sell off their graphics cards to make up for their losses, pushing the market to a new equilibrium. 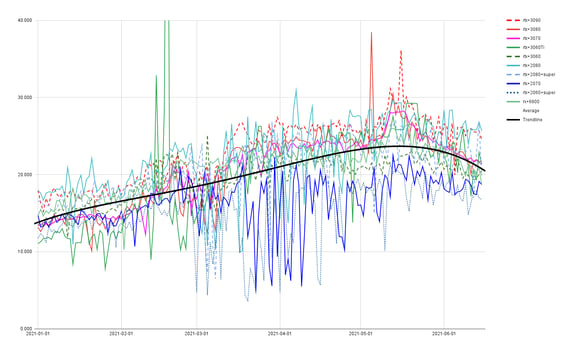 Price per hash rate of each GPU over time. Source: Reddit

ETH1.0 uses a Proof-of-Work (POW) model, i.e. working more and getting more. With the advent of Proof-of-Stake (POS), ETH2.0 will start rewarding miners based on their existing ETH holdings. In the era of ETH2.0, higher computing power doesn’t translate to more ETH. The vast majority of the graphics cards purchased by miners were chosen for their hash rate, and this won’t be needed anymore.

3. Ordinary consumers are fighting back

The price of virtual currencies rose from last November and reached its peak in early May this year. At that time, scalpers and distributors had a large number of GeForce RTX 30 series graphics cards. They hoped to continue to sell them at a high price. So they controlled the price of graphics cards, keeping them at an all-time high level. In China, one had to pay RMB 6,000 to buy an RTX 3060 which was originally priced RMB 2,499(almost 2 and a half times more expensive).

This situation continued for about one month. In mid-June, the Chinese gaming community came up with two measures to tackle this problem. First, people were encouraged to post graphics cards listings at original prices on second-hand goods marketplaces, but cancel orders when they received them. This would unsettle the second-hand market and confused the scalpers.

Second, graphics cards were purchased from scalpers in bulk, and then returned back, causing increased storage costs for scalpers. This community effort had a huge impact on the decrease in GPU prices globally.

In mid-May 2021, the Chinese government released an announcement that pinpointed the risks of virtual currencies and emphasized that virtual currency transactions are illegal. From May 21 2021 onwards, the government began cracking down on miners on a large scale. As a result, many domestic mining farms were shut down. A 30% decrease in BTC prices in one week followed suit.

5. Should you seize the opportunity to buy a graphics card now?

Although GPU prices have decreased sharply for high-end cards, their prices are still inflated much above the MSRP. RTX 3060 decreased from RMB 6,500 to RMB 4,300, much higher than the RMB 2,499 original. Ordinary consumers need far more graphics cards than the quantity they are supplied. Therefore, even with the advent of clocked down hashrates by the manufacturers (a move to make them less desirable to miners), the prices of such GPUs will be almost the same as those without them.

Even with the falling prices, I don’t think this is a good time to go shopping just yet. First of all, the price drop is still controlled by miners and scalpers. This means that they are expecting the invisible hand to do its magic and push the prices down back to normal soon. In addition to that, even if you can get a used card at a favorable price, it is very likely to be a mining card and you should expect to see blue smoke after a short time of using it. So hold on to your good old GTX 760 a little longer. Better times are on their way!

Orkun is the Marketing Manager at NexPCB. He's been living in China for almost 10 years. His passion lies in new and emerging technologies. You can contact him over LinkedIn for blog collaborations.

What is HS Code ?