NB-IoT is an LPWAN technology that is widely used around the world due to its secure, wide-coverage, and fast transmission capability.  Having to run in parallel with cellular network operators, the operating conditions and choices are discussed around the globe: its architecture, devices, and support required for a maximized performance.

NB-IoT or the Narrowband Internet-of-Things technology had been one of the epitomes of 5G M2M (machine to machine) technology in recent years, operating as the Release 13 (CAT-NB1) and Release 14 (CAT-NB2) of the 3GPP Standard. Being one of the LPWAN (Low Power Wide Area Network) technologies, NB-IoT ensures a wide, fast, efficient, and reliable data transmission by being deployed into a licensed band of a cellular network.

Like any other communication technology, data transmission should be carried out within a range of frequencies. The choice of these frequencies depends on the region on which the NB-IoT is implemented which will be discussed further in the following sections. With a bandwidth of only 200 kHz and a half-duplex transmission technique, the NB-IoT technology ensures a low power consumption, estimating a battery life of more than 10 years.

The bands used for these operations are licensed by the 3GPP TS 36.101, in which the frequency bands per region are defined by numbers, as shown in the table below.

In which the bands and their respective uplink and downlink ranges are further defined below. 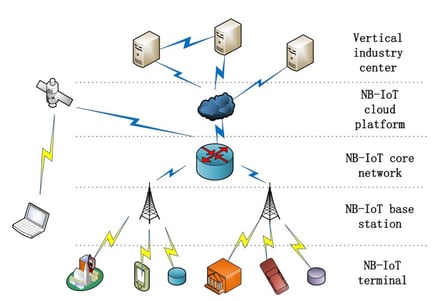 Unlike LoRaWAN, an NB-IoT network doesn’t require any gateways for its operations. The NB-IoT devices are implemented by chips and/or SIM cards, enabling communication between the NB-IoT core network and the end devices. The transfer of information was done through the base stations of the registered cellular networks.

When designing a product, some of the components to be prepared for the infrastructure include the chipsets, modules, up until the individual devices (such as sensors), which could be obtained from companies such as Huawei, Qualcomm, and ublox. 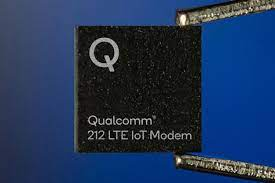 NB-IoT was first designed for Europe and Asian markets in 2016. The market was then further extended to Australia, North America, and South America, establishing 2 operators (AT&T and T-Mobile) in the US in 2019. Up until now, the country to use the most NB-IoT technology is still China, with China Telecom claiming to establish more than 100 million connections by May 2021.

Based on data from GSA (Global mobile Suppliers Association), per April 2021, there are 165 operators actively investing in NB-IoT technology, of which 120 have deployed the networks in 64 countries, 25 are planning and/or piloting networks, and 20 are evaluating and/or trialing.

Another database by the GSM Association states that by July 2021, 106 NB-IoT networks across different countries had been established, with the cellular operators listed in the table below.

Unlike LoRaWAN and other mobile services such as LTE communication devices, the NB-IoT has very limited mobility. Instead of allowing multiple handshaking procedures, the NB-IoT’s mobility is only supported by the cell reselection technique, which limits its performance. Despite this, NB-IoT was designed to allow a fast data transfer rate with deep indoor penetration, hence applications such as remote monitoring would operate well using the NB-IoT technology.

Having a similar working operation as the NB-IoT, the LTE-M, also known as the eMTC (enhanced Machine-Type Communication) feature of the 5G or 3GPP standard, is claimed to be able to have a stronger network transmission (faster data exchange speed) with lower latency than NB-IoT. However, it’s limited by its high power consumption and coverage, especially when applied to assist in indoor penetration.