Capacitor Polarity: How To Tell

Capacitors are passive components that store charges as a store for electrical energy. They are off by two major categories: polar and nonpolar. Polar capacitors need extra attention on their implementation to the circuit - the poles should be placed correctly to serve their function. 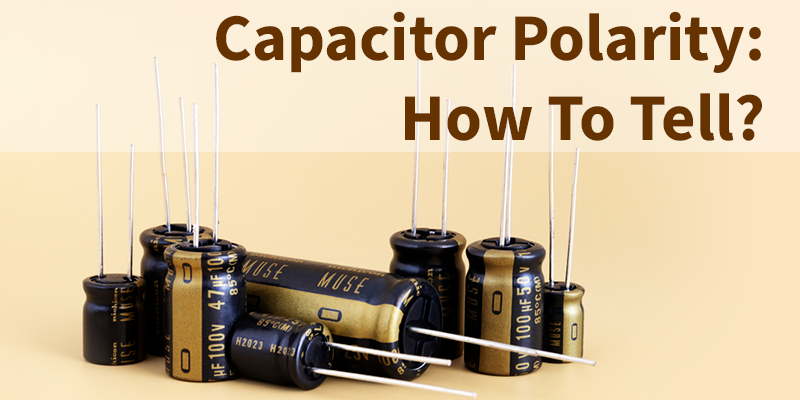 The polarity of a capacitor can be visually identified without the use of a multimeter using some of the common methods, which include as follows:

1. The Polarity of Radial Electrolytic Capacitors

The housings of the radial electrolytic capacitors are mainly in black-gray or green-black color, with two pins of different lengths. These characteristics, the color and pin length of the capacitors could be used as a method of polarity identification.

2. The Polarity of Tantalum Capacitors

A typical tantalum capacitor is polarized and has positive and negative poles. The component is usually yellow colored and is designed to be surface mounted on the circuit board. On the surface of the housing, an end marked in-dash denotes the positive pole, and hence the negative pole is at the other end.

Tantalum capacitors’ polarity identification technique is similar to those of SMD diodes. However, it is to be noted that a marked end of a diode denotes the negative pole, which is the opposite of that of the Tantalum capacitor.

3. The Polarity of Aluminum Electrolytic Capacitors

Aluminum electrolytic capacitors are generally colored by mainly the color grey. The capacitor has also been geometrically configured,  has different sides with right-angle corners and trapezoidal corners which also serve as a polarity identification.

II. Use of Multimeter

Despite the ease of telling a capacitor’s polarity by its appearance, some might not know or are unsure of the identifying characteristics. Therefore, it is a common practice to identify the polarity of a capacitor with a multimeter. By using professional equipment, we can ensure the precision of the results.

It is basic knowledge that the current passing through an electrolytic capacitor is small (i.e. large leakage resistance) when its anode is connected to the power supply’s positive pole (a multimeter’s black pen for resistance measurement) and the cathode is connected to the power supply negative (multimeter’s red pen). Otherwise, the leakage current of the electrolytic capacitor will be high.

Here are a few ways on identifying the poles of a capacitor. Remember to connect the anode (positive pole) of the capacitor to the respective positive pole of the power source. Only by this, the circuit can be completed and the capacitor can operate as expected.

June is an electrical engineer at NexPCB