NB-IoT and the Trinity of Fast, Cheap and Low-Power

NB-IoT (Narrowband Internet of Things) has been gaining more attention from technology enthusiast in these last few years. It has been widely deployed around the world as a feature by mobile operators such as Vodaphone and Verizon. What differs NB-IoT from the other IoT networks is that the technology enables communication between IoT devices across a narrowband of frequency, around 180 kHz.

An IoT device (or things) that requires a steady connection across a long-distance won’t necessarily need the fastest transfer rates. Instead, the goal is to keep power consumption low while keeping transfer speeds good enough for retrieving sensible data. While that rate will ultimately depend on your application, you should try to keep it on the lower-end if your product relies on costly networks or will be used off the grid. 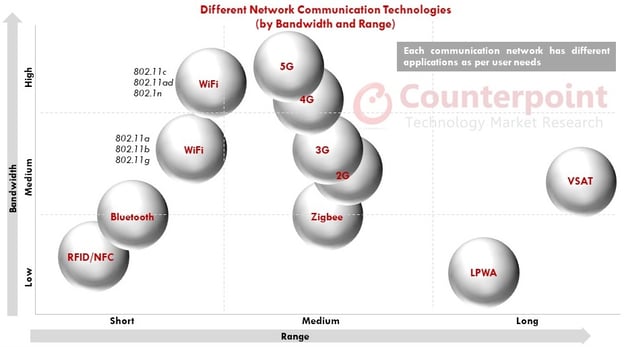 The LPWAN (Low Power Wide Area Network) technology presents itself as the go-to solution for devices that require sending data across long distances with the lowest power consumption.

The LPWAN market itself is classified into two, cellular and non-cellular networks. Cellular LPWANs such as NB-IoT and LTE-M are centralized networks ready for deployment anywhere around the globe. Meanwhile, non-cellular networks like LoRaWAN and Sigfox are more likely to be self-hosted and are much more personalize-able. Their downside is the difficulty of setting up or finding a 3rd party network that suits your needs.

NB-IoT is a cellular LPWAN solution that works on 4G and 5G bands. This means, that if you have those available, you don’t need an additional network. That means NB-IoT is widely supported by mobile operators around the world. Hence, you can use the NB-IoT device you bought in the Netherlands in Korea, and vice versa, as long as you are connected to an operator supporting NB-IoT networks.

Since cellular networks piggyback on network operators’ working frequencies, they will experience less interference. With less interference, the integrity of the transmitted data or information is higher. Data transmission with NB-IoT hence has higher coverage and efficiency compared to non-cellular alternatives like LoRaWAN.

Despite the initial deployment cost of non-cellular LPWANs, they are usually cheaper in the long run since they don’t constantly incur data costs, since there is usually no network operator apart from yourself to deal with.

IoT has been becoming even more ubiquitous in the last few years. The growth is said to continue in the following years, with Business Wire predicting the cellular (includes 5G connection) and non-cellular (includes BLE, Zigbee, etc.) IoT WAN markets to reach $25.9B and $47.4B respectively by 2025. Another source, Global Insights, Inc. projected that the LPWAN technology alone would reach an $80B market in 2027.

Within the LPWAN family, non-cellular networks are still profoundly more utilized than cellular networks, since they’re cheaper to be run on smaller enterprises in the longer run. LoRaWAN alone projects around $4.5B in 2025, mentioned in a report by IndustryARC.

Despite its vast growth in recent years, LoRaWAN’s data security issues and higher setup requirements potentially inhibit its growth in the next few years. NB-IoT on the other hand has rapidly been adopted by various mobile operators around the world to ease its deployment.

The market growth of NB-IoT as a cellular LPWAN solution is however behind its original prediction, being held back due to the COVID-19 pandemic. Research and market predicted the global NB-IoT Enterprise Application market value to increase from $16.7 million in 2017 to $181.02 million by 2022, with a CAGR (Compound Annual Growth Rate) of 61.06%.

Currently, China still occupies the largest market for the NB-IoT deployment. China Mobile, the largest mobile operator in China (and in the world, based on the number of subscribers) had deployed around a total of 350.000 NB-IoT base stations and 1 million connections in 2021.

According to Global News Wire, China is expected to enjoy an 82.6% CAGR from 2020 to 2027, reaching a projected NB-IoT market value of $26.3 Billion by the year 2027. With this large growth prediction, most of the NB-IoT innovations are expected to grow in China.

Narrowband IoT provides the public freedom to design their own modules, chipsets, and devices that support NB-IoT, without any special certifications from GSMA. In addition to the enormous growth potential of the Chinese and global market in China, companies there will start designing and producing new components with better features to support the increasing demand for NB-IoT applications. NB-IoT also has a growing community behind it called the Mobile IoT Innovators.

This growth in innovation then will further push the utilization of NB-IoT as a solution for M2M communication, telecommunication, smart homes, and many more. It's a good idea to start designing your product with NB-IoT now, this might be your ticket to leading the future IoT market.