In the process of designing a new IoT product, the method of communication between devices and/or controllers must be first configured. With an increase in the demand for mobile technologies, products are becoming more required to be able to communicate wirelessly with each other. There are a few considerations on choosing the network for your system: the size, range, cost, power, components, and even the protocols used -- to ensure minimum resources would be spent to achieve the desired working outcome.

IoT or the Internet of Things is a global infrastructure for the information society, enabling advanced services by interconnecting (physical and virtual) things based on existing and evolving interoperable information and communication technologies, as defined in the Recommendation ITU-T Y.2060. Put simply, IoT is the technology that enables the transfer of data between devices or objects without human intervention to carry out specific tasks. Examples of IoT applications over recent years would include autonomous vehicles, cloud computing, automatic stock management, and many more.

The recent technological findings usually revolve around the 5G technology or are based on the 3GPP standard which supports the 5G operation. Using IoT applications with the 5G technology requires us to implement the 5G NG-RAN or New Generation Radio Access Network. To implement this, several components are required: antennas, radios, baseband (RAN Compute), and RAN software. From Ericsson, the 5G RAN is foreseen to be highly implemented in cloud gaming, AR/VR (Artificial or Virtual reality) applications, autonomous vehicles, and fixed wireless access. 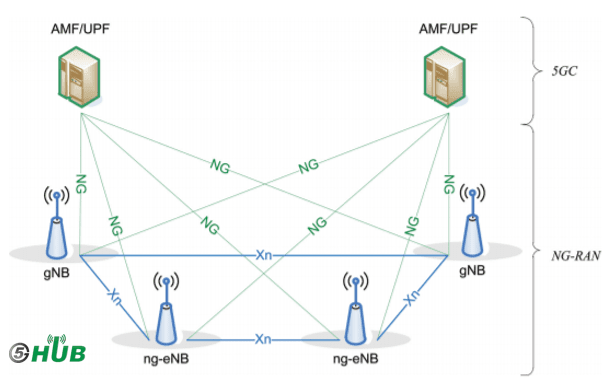 The 5G NG-RAN technology allows application with 2 different kinds of nodes: the gNB, or next-generation Node B, and the ng-eNB, or the next-generation eNodeB. The gNB is incompatible with the existing LTE and LTE-A systems, hence for the sake of interoperability, ng-eNB is usually used instead.

LoRaWAN or the Long Range Wide Area Network is one of the low power, long-range wide area network technologies. It was developed and patented by the LoRa Alliance, running on an unlicensed spectrum to establish private networks over a wide area.

When compared with the other technologies (i.e. NB-IoT and Sigfox), LoRaWAN has the lowest application cost, and lowest power consumption rate -- claiming the technology could allow some devices to run for up to 20 years on conventional batteries.

The frequency ranges to be implemented with LoRaWAN-compatible devices are different between countries. This occurs due to the various regulations implemented in the regions. With this, an initial setup and a gateway is required when first designing your LoRa network.

The NB-IoT, or the Narrowband-Internet of Things, is a cellular-based LPWAN that runs on a licensed spectrum based on the 3GPP global standard. It runs with 120 network operators around the world by April 2021, with another 45 more networks actively investing in the technology.

The NB-IoT technology deploys a narrowband transmission of data, using only 200 kHz for its transmission purposes. Since the technology has become more frequently used in recent years, it has been implemented in 64 different countries by April 2021, with one of China’s network operators, China Telecom, claiming to have established more than 100 million networks by May 2021.

Sigfox is also another choice of the narrowband LPWAN technology, but unlike LoRaWAN and NB-IoT, it operates in an asymmetric link for its bidirectional communication path. The Sigfox itself runs in an unlicensed spectrum (like LoRaWAN) and is a publicly available technology, with its modules being incorporated into different components and enables

WiFi, or Wireless Fidelity, is a wireless local area network (WLAN) standard by the IEEE 806.11. It’s the most widely used network in the world, providing connectivity between computer devices and the internet. WiFi is commonly implemented in hotspot areas, such as shopping centers, airports, office buildings, and even houses.

It operates using a series of wireless access points that transmits and receives radio signal data. The properties of these radio waves depend on the version of the IEEE 806.11 standard it follows, as each has different bandwidth, speed, range, and transmission technology.

The Bluetooth technology runs by the IEEE 806.15 standard, which dominates the Personal Area Network (PAN) technology standard. Its network configuration runs in an ad-hoc manner, that is, allowing the devices to be connected to each other rather than having one access point to connect to the central system.

The Bluetooth technology is only able to support 8 devices at a time: 1 master and a maximum of 7 slaves. Being a great option for instant, remote communication between devices, the Bluetooth technology was limited to only a 10m range. It’ll also face some physical layer problems when operating near a microwave source, as the technology operates at a frequency of 2.4 GHz.

Zigbee (IEEE 802.15.4) has been increasingly used within the smart home and smart office industry in the following years. Zigbee itself is a wireless mesh network standard for battery-powered devices. Unlike Bluetooth, Zigbee was able to support a large number of nodes, with the recently developed Zigbee PRO 2015 to theoretically support up to 65,000 nodes.

Z-wave is a more recently developed mesh network protocol from a Danish startup known as Zensys in 1999. Having been acquired by Silicon Labs, Z-wave operates at a lower data rate than Zigbee, with a data transmission rate at 40 kbps (as opposed to 250 kbps in Zigbee), but is able to reach a larger range than Zigbee, reaching up to 35 m. 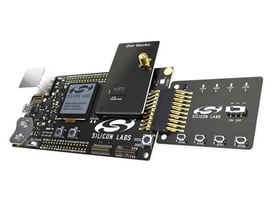 Other than the application of simple wireless WAN, LAN, and PAN in IoT applications, using additional components such as chip and tags along with a reader will allow connection between these network systems to connect to a non-digital device, such as food and clothes, just by attaching a chip or tag on it.

Standing for Radio Frequency Identification, RFID is highly implemented in IoT systems and has been widely used in the global market since 2010. The RFID technology is composed of 2 main parts: the RFID reader or transponder, and the RFID tag.

RFID is mainly used for stock management and tracking systems. The transponder usually transmits an electromagnetic pulse to trigger the response of the RFID tag. The tag will then transmit back a digital signal to ‘tell’ the reader its position and hence data is logged. RFID readers can accept and transmit numerous data at once (bulk monitoring) since the tags are usually attached to a number of objects (i.e., clothes, food, books, and other appliances).

NFC, or Near Field Communication, like its name, establishes communication between two devices that are within a close distance from each other (around 4 cm). NFC is usually used as a card replacement, serving its use for identification and transactional purposes, such as contactless payment.

NFC has been researched further for future applications of consumer electronics IoT, since it doesn’t run with any handshaking protocols, and would allow easy establishment of connections without any complicated initial setups.