What is IPC2581? Why is it important for electronics engineers?

IPC-2581, also known as IPC-DPMX, or Digital Product Model Exchange, is one of the "Application Characteristic Data" standards in the IPC 25XX Series of Data Exchange Standards of the IPC standards in the electronics industry. It is a new layered neutral data format with superior manufacturability, quality, reliability, and consistency for data information transmission between a PCB designer, a manufacturing and assembly facility. It is developed by a group of standards developers, tool developers, CAD users, and CAM users. 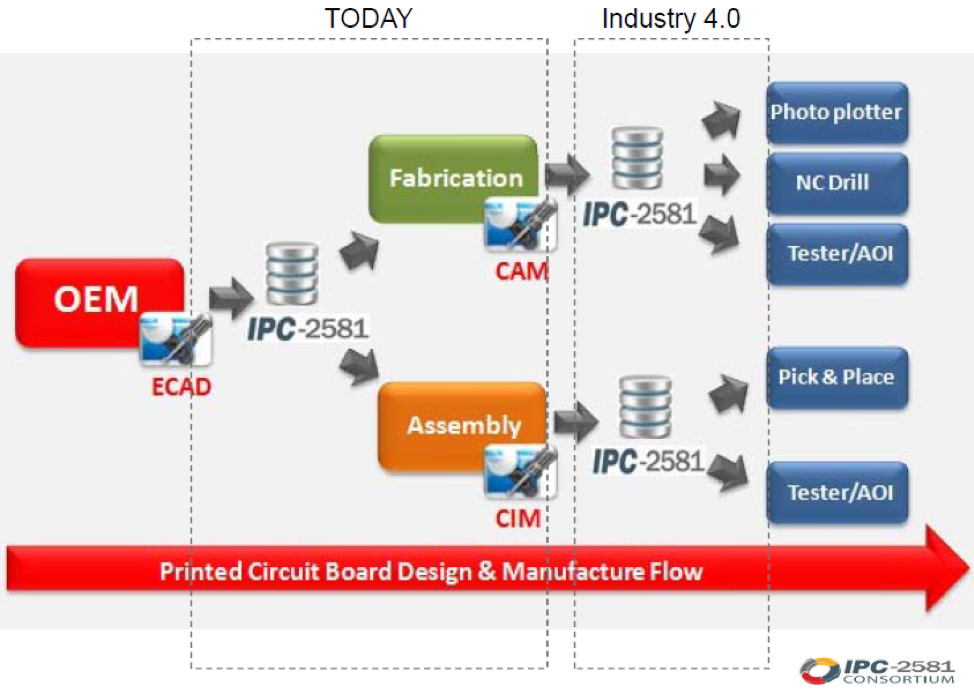 The standard is now being promoted by the IPC-2581 Consortium, with an independent website www.ipc2581.com. An updated version, the IPC-2581C, has been released in December 2020. The new version introduced even more groundbreaking new features.
However, before we discuss the features and benefits of this standard and why we need it, we need to understand the shortcomings of the existing data format, i.e. the inherent limitations of the RS-274X Gerber format:

● A separate physical file is required for each layer of PCB information, such as manufacturing records and assembly layers, etc.
● Drill information (usually in the format of the N.C.drill file) needs to be sent separately.
● Layer stackup definition needs to be presented in the form of diagrams, text, or filenames and agreed upon with the manufacturer.
● The netlist used for testing (which contains the electrical connections between components) also needs to be sent separately.
● The pick-and-place file with component placement information and the BOM procurement file are also made separately, which often tends to cause errors.

Compared with other standards, the IPC-2581 standard uses a single XML-based file that consolidates a richer set of board manufacturing data. Including:

We can open an XML file and see the following content:

It can be seen that documents based on an XML format have additional advantages:

● Integrity: All data can be exported from EDA tools using one format.
● Security: No intermediate data conversion, and support selective output, such as sending only manufacturing data to the PCB manufacturer.
● Smarter: The XML-based format provides intelligent calculation and recognition, eliminates human errors while providing an information base for intelligent data in industrial automation.
● More open: The Consortium membership gives the benefit to be free from patent restrictions, with continued updates and expansion of manufacturer software and EDA software support.


In fact, IPC-2581 was created with the combination of GenCAM and ODB++. Although Gerber has introduced Gerber X2 to make up for some of the deficiencies found in the older version, it can't be done overnight due to downward compatibility with older data and devices.

IPC-2581, as one of the underlying standards of the entire IPC Standards Tree, has a more rigorous hierarchical structure and can align perfectly with other IPC standards, providing a natural tool and means for PCB manufacturing and assembly companies to comply with the IPC standards.

IPC-2518C also supports automation supporting Industry 4.0, and bidirectional DFX intelligence capability, which addresses the collaboration issue of DFM. It also reduces the communication barriers and information omissions between various players such as clients, designers, PCB manufacturers, and PCB assembly factories, greatly improving work efficiency and reducing costs.
NexPCB is actively investigating the support and application of IPC-2581 and will launch IPC-2581 support services when the time is ripe. We believe every reputable electronics manufacturer should do the same

how to work with this new model, sign up for our blog now.

With every change comes a backlash, but in the case of IPC2581, the general consensus tends to be optimistic, given the past difficulty in communication with the older standards. Do you think the new IPC standards will help us move towards a more hands-free manufacturing workflow, or is it adding unneeded complexity to the older model? Let us know in the comments!

Shipping Electronics Products with Lithium Batteries into the EU