Everything looks fine, so why are your eMMCs failing? How do you track down the issue?

We previously introduced you to what eMMCs are used for, today we will be talking about how to fix a common issue with them.

Customer feedback we recently received indicates that some i.MX7 COM (system on module) boards encountered occasional boot failures. According to conventional fault analysis steps, the first step is to reproduce the fault after the receipt of faulty samples.

Therefore, we install the COM board onto the carrier board, connect it to the terminal software Tera Term, power on/off and install/remove the motherboard frequently to reproduce the fault. It is confirmed that occasional boot failure does exist this way. Sometimes it boots normally, sometimes it fails to boot, and sometimes it boots slowly. Although this problem does not occur regularly, it is clearly something we can't ship without solving first.

We can use a fishbone diagram analysis method:

Working steps for inspection of the manufacturing testing jig:

This working sequence is obviously not a normal procedure, so the performance of the faulty board on the two jigs may be related to how the carrier board works and the sequence of the test boards. The basis is to be supplemented.

The analysis on how it works starts from the boot option, and the confirmation is made first according to the boot option. There are four boot options on the COM board: SD, MMC/eMMC, QSPI, and NAND. By checking the hardware configuration (pull-up resistor), it is confirmed to be MMC/eMMC boot.

Then we analyze the boot program, which is basically divided into five steps:

We know SPL is a subset of U-BOOT and is stored in the Boot Area of eMMC FLASH together with U-BOOT. Therefore, we narrow our focus to the eMMC FLASH.

Now we begin to focus on the analysis of FLASH, we install the faulty board onto the Carrier board again, connect it to the Tera Term terminal software, power on/off frequently, observe the log, and inquire about the information of eMMc by inputting the MMC info instruction. However, three different kinds of information are captured. They are respectively the followings:

Therefore, we can learn some important information from the display of LOG. 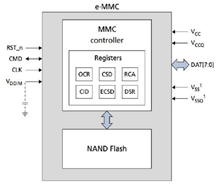 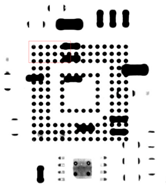 Figure on the top: Technical diagram of eMMC. Bottom: X-Ray scan of the faulty product

It can be seen from the structural diagram of eMMC FLASH that the management of bad blocks is automatically set through related control registers, and under the circumstance that the hardware configuration related to bandwidth setting on the motherboard is checked to be correct. The variation of bandwidth is probably due to the situation that some lines of DAT[7:0] are broken or non-wetting occurs on the bonding pad, and the intermittency leads to the abnormality in polling the bus bandwidth.

Therefore, X-RAY scanning is arranged, the red frame shows the bonding pad of the data line, and the result shows that non-wetting cannot be identified due to the angle of view.

Then the second step is performed, i.e., performing the repair welding of FLASH through a reflow oven, and the fault is not reproduced in the testing of the repaired samples, so this operation is extended to the other faulty samples, and the result is verified repeatedly.

The working principle of the test system indicates that the probability of detecting occasional faults by a normal boot in step 5 is low, and even a product fails to pass a test initially, it may pass the retest later on.

It is considered to execute two times of resetting and booting in step 5 of the testing jig, and implement the retest invalidation mechanism, that is, any fault found must be repaired.

Appropriate reliability test methods should be designed for motherboard products, such as the vibration test in the running state, and the full function strength test after the reliability test.

Have you ever had a similar problem driving you nuts and you realized the problem is caused by faulty soldering?

A simple cold joint can break a whole product. We don't claim to make any errors at NexPCB, but we claim to find the underlying issues and fix them before your products can get harmed by them through diligent engineering.

Design Mistakes We See at NexPCB (and How We Solve Them)