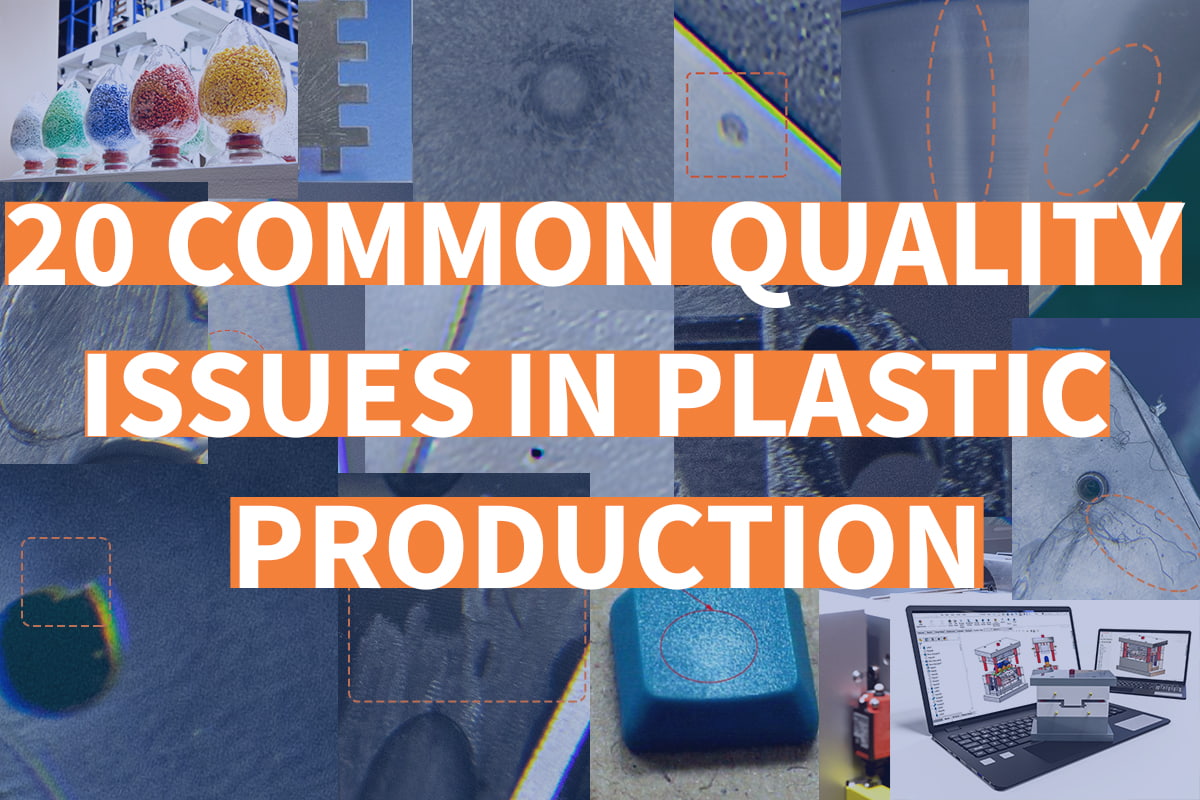 Plastics are great! They can be formed in almost any shape and allowed form factors of items we use today to shape drastically. But their ability to be formed in different shapes can also mean they form in a way you didn't want them to. So you need to control the variables that go into manufacturing plastic parts very carefully.

We put together a list of common errors in manufacturing plastics for you to refer to when you face these issues. We also have an ebook that you can download for free!

We call this phenomenon a „short shot” due the fact that it is caused by the molding shot falling short of filling the mold. In other words, the melted plastic can’t manage to occupy all the space designed by the mold and creates an unfinished and deficient product.

During the injection process, there are times when parts of the mold don’t get enough pressure to set the plastic. When this happens, it can cause additional stress on that area where the rate at which the plastic shrinks is slower than other areas. The sink marks appear when the surface of the plastic is pulled in by this stress because the surface isn’t solid and the melt isn’t complete.

During the injection process, sometimes a little bit of plastic can seep out of the die joint and make a small rib. This is called flashing. Flashing is not a good phenomenon in injection molding production, and it can cause die joint damage if the flashing can’t be immediately cleaned from the die joint and the clamp.  This type of damage will cause more evident flashing in future products. For this reason, it’s very important to look out for flashing marks in injection molding production and remove them before they turn into a persistent problem. 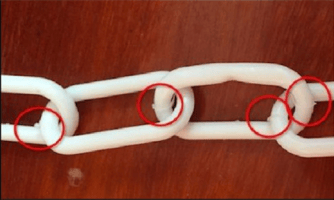 When the mold cavity fills up, it is possible that the flow of the plastic is too quick and air can’t escape quickly enough from the mold. When this happens, bubbles can form in the materials. These may be very large and very small. The presence of air sets this issue apart from vacuum voids, which are caused by a similar yet not identical set of causes. 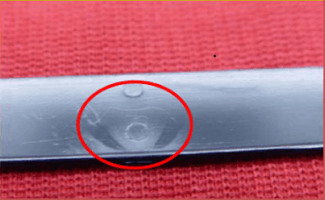 There are times that, when a part has been manufactured and released from the mold, the surface has an area where the volume has expanded more than its surrounding area. This phenomenon is called blistering. Blisters elevate the surface of the product with a thin, film-like layer. 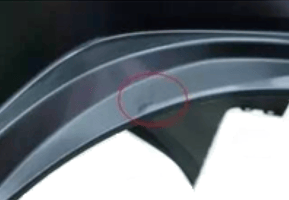 Shrinkage in the interior of a plastic part is often called a vacuum void. It is generally found in an area where the plastic is very thick or where multiple channels come together to form a rib or a wall. These areas are especially susceptible to uneven cooling or shrinking, which is the underlying cause of voids. 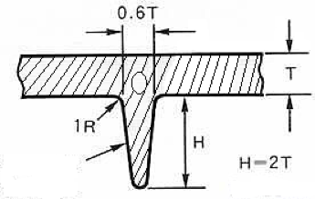 When two or more plastic streams meet at different temperatures as the plastic is filling the mold cavity, the two streams may not correctly mix together. When this happens, a weld line is formed where they interface.

Warpage means that the shape of the injection parts are inconsistent with the requirements of the design drawings and presents visible deformations.

These deformations are usually caused by uneven shrinking of the plastic parts, or due to stress that during demolding. The most common underlying cause of warpage is the use of glass-reinforced plastic molding, large surface areas or very thin/structurally weak products. 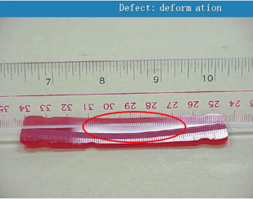 If the melt is injected too fast at the gate, the surface of the parts (in front of the edge gate) will produce a serpent-shaped line. This is commonly called jetting.

Jetting mostly occurs with edge gates. When the plastic melt flows through the nozzle, runner,  gate, and other narrow areas at high speed, it suddenly enters the open and relatively wide areas of the mold where the melt material will bend forward along the flow direction like a snake.  The molten plastic will then cool down quickly after contact with the mold surface. Because this first-to-enter part of the material can’t have good fusion with the rest of the resin subsequently entering into the cavity, this phenomenon results with a visual defect. 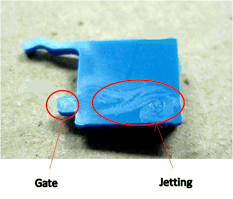 If the gate is too small and the injection speed is too fast, the melt flows violently and pulls air into the melt. This will leave cloudy marks in the gate location, turning points, and step positions of the plastic parts. It’s easiest to see gate blush at the gate with materials like ABS, PC, and PPO. 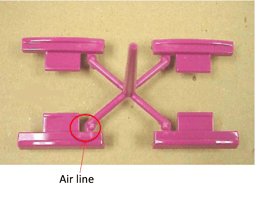 During the injection process, there are times when parts of the mold don’t get enough pressure to set the plastic. When this happens, it can cause additional stress on that area where the rate at which the plastic shrinks is slower than other areas. The sink marks appear when the surface of the plastic is pulled in by this stress because the surface isn’t solid and the melt isn’t complete.

After injection molding, the surface of the plastic parts can get cracked in a number of different ways. Although most of these will be partial cracks, in some extreme cases complete fracture of the material can take place.

The issues mentioned here only accounts for the ones arising during the manufacturing process. The solutions are intended to solve those in particular. If you’re facing product issues related to usage wear and tear, you might want to go back to your design and make necessary changes before manufacturing future batches. 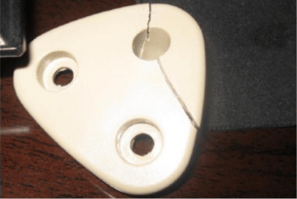 Air burns present themselves as black and brown marks caused by overheating of the part due to air or other gases trapped within. Proper venting is required to release these gases and stabilize the temperature of the melt in the process.

Venting will depend on proper number and width of channels, and a slower, steady injection. A more subtle, but more frequent issue is the change of color in white pellets into a slight shade of yellow. 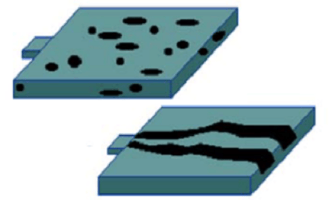 The problem of black specs is difficult to avoid in injection molding and needs to be controlled from the raw material, crushed material, ingredients, feeding, environment, and production processes to reduce the spec rate. The main reason for the black impurities to appear is that the foreign material within the plastic melt will degrade at high temperatures.

When the plastic part is ejected from the mold, the ejector pin will often leave deep or shallow traces on the plastic part. These traces can be shallow enough and away from the product face. In that case they can safely be ignored. But when these marks are causing non-uniform, deep, asymmetric marks on the part surface, they can cause problems. Although one could think that ejector pin marks are solely caused by the part sticking to the mold and therefore it is a mold issue, in reality it’s more closely related to the manufacturing process.

If these traces are too large, it is called visible ejector marks. In the most extreme cases, the ejector site can be elevated above the part surface. 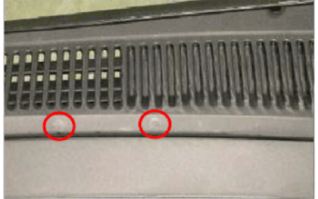 When a part is being ejected from the mold, sometimes its surface can suffer from abrasion if the ejector system is not aligned or the draft angles are not sufficient enough to remove the part from the mold within allowed resistance. If the problem isn’t a misaligned ejector system, in most cases the mold needs to have some tool work done on it and in some cases it needs to be changed completely with a better mold design. 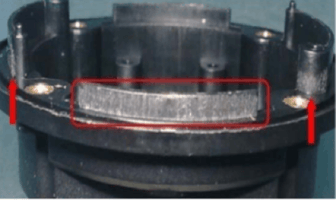 Spatter lines formed on the surface of the plastic along the direction of melt flow are called silver marks.

The emergence of silver marks is generally due to the rapid start of the injection which causes the air in the melt and mold cavity unable to be discharged quickly enough. This results in the appearance of silver filaments on the plastic surface. Silver marks not only affect the appearance of the plastic parts but also reduces the mechanical strength of them as well. The formation of silver marks is mainly due to the gases in the melt surface of the plastic part. By finding the source of these gases, we can find out the methods to solve the defects. 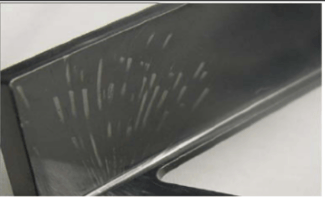 Splay mark is a water wave pattern which can not be removed after the part is formed. It is mostly seen on the plastic parts with a smooth finish.

Splay marks are caused by the first melt into the cavity cooling too fast while the hot melted plastic is forced into the front to push the initial melt forward, which causes the formation of water wave lines. They can be eliminated by increasing melt temperature and mold temperature, accelerating injection speed and increasing hold-in times. If the cold material remaining at the front end of the nozzle enters the mold cavity directly, it will also cause water ripple formations. Therefore, a cold material well should be opened at the end of the main channel to effectively prevent the occurrence of the splay mark. 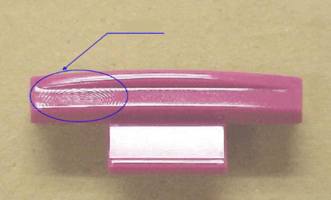 The surface of the plastic part or the part where the flow direction changes will produce a local color deviation phenomenon, called color streaks.

There are many reasons for color streaks including uneven pigment diffusion during the injection molding process, incomplete cleaning of the barrel, mixture with other colors in the raw materials, the unstable proportion of recycled material, and poor melt plasticization. 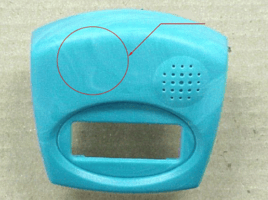 When the plastic part is formed, the finished surface can lose its original luster and form an opalescent film, or is in a fuzzy state. 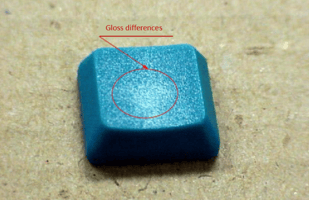 Free Resource: 20 Most Common Problems in Your Plastics Manufacturing

Have a project where you'd like professional help with your plastics? We're always happy to help! Press the LAUNCH button on top of this page and introduce us to what your manufacturing goals are. Alternatively, you can contact support if you need to shoot a question! If you have a specific project and can share the 2D/3D files with us, then you can submit a project request and our engineers can take a look and get you a quote!

Orkun is the Marketing Manager at NexPCB. He's been living in China for almost 10 years. His passion lies in new and emerging technologies. You can contact him over LinkedIn for blog collaborations.

How to deal with insufficient solder and excess solder in PCBA